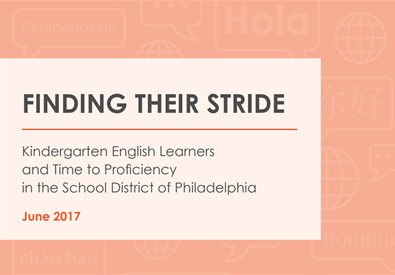 Paralleling demographic shifts in the city, the School District of Philadelphia has seen an increase in its English learner (EL) population. By 2014-15, one in ten students was classified as an EL.

While ELs enter District schools at all ages and grades, they are most likely to enroll in the early elementary years. Almost 60% of the new English Learner entrants to the School District of Philadelphia between 2009–10 and 2013–14 were in kindergarten through third grade, with 37% entering as kindergartners.

The young age of these ELs presents both a challenge and an opportunity. The challenge is to help these young Philadelphia residents make two important transitions at one time: adapting to the unfamiliar faces, routines, and expectations of schooling, while also becoming proficient in a second language. The opportunity is that these young learners can achieve English proficiency early in their school years when they are given strong instruction and support for acquiring English. Proficiency, in turn, enables them to take full advantage of opportunities to learn grade-level academic content and skills.
This study provides evidence on the progress toward English proficiency of ELs who entered the District in kindergarten across four cohorts of students: 2008–09 through 2011–12. We examine students’ English proficiency upon entering school and the percentage who achieved proficiency within four years.

Our outcome measure was performance on a state-mandated assessment of English proficiencies needed to engage successfully with peers, teachers, and academic instruction in school: Assessing Comprehension and Communication in English State-to-State for English Language Learners (ACCESS). The ACCESS assessment must be administered every spring to any student whose home language is one other than English until the student meets the state’s standards for English proficiency and is reclassified as no longer needing linguistic support.