Getting On Track to Graduation: Ninth Graders’ Credit Accumulation in the School District of Philadelphia, 2015-2017 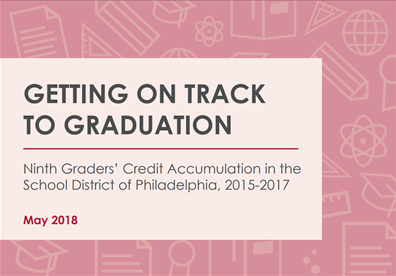 Ninth grade is a critical juncture for students. Students who make a good transition to high school are likely to graduate within four years. Those who do not—who fail to earn as many credits as they should in ninth grade—face an elevated risk of dropping out of high school.
​
In 2018, the School District of Philadelphia (SDP) established a new Ninth Grade On-Track Definition. To be considered on track to graduation, a student completing the first year of high school must have earned at least one credit in each core subject (English, mathematics, science, and social studies), plus one additional credit from any subject. Annually, the District expects to report the percentage of students on track to graduation at the end of ninth grade.

This study applies the 2018 Ninth Grade On-Track Definition to students who were first-time ninth graders in the SDP during the 2015-16 or 2016-17 school years. The study examines how many students were on track to graduation, the characteristics of on-track and off-track students, and how on-track rates differ across high schools. Although the On-Track Definition was not in place at the time these students were in ninth grade, the analysis provides a benchmark against which progress can be measured and identifies characteristics of students and schools that might need additional support to start strong when they enter high school.