On Track Across Four Cohorts: Ninth Grade On-Track Patterns in the School District of Philadelphia, 2013-2017 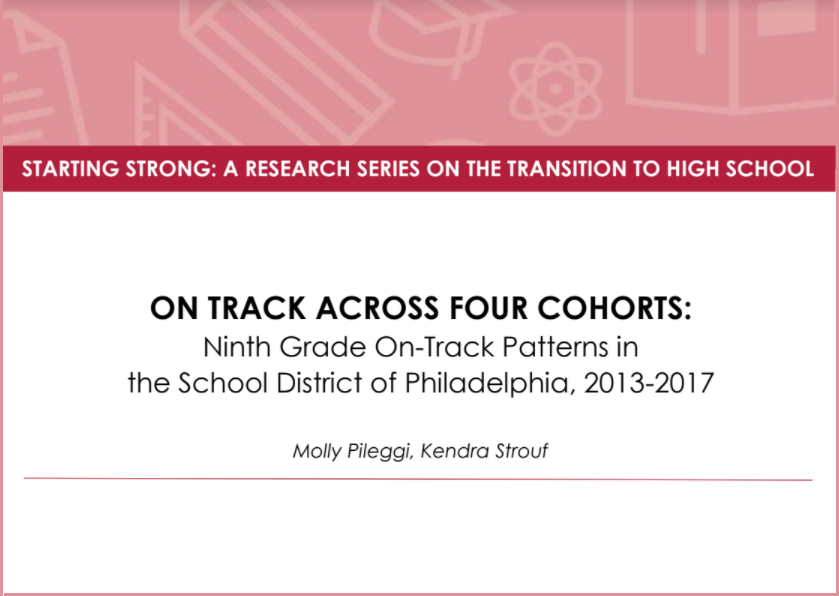 This brief is an addendum to an earlier report, Getting on Track to Graduation, published in May 2018 by the Philadelphia Education Research Consortium (Crofton and Neild, 2018). Focusing on two cohorts of first-time ninth grade students (the Classes of 2019 and 2020), Getting on Track to Graduation examined the extent to which students earned the number and type of course credits required to be considered on-track to graduation. This brief extends analyses from the earlier report with data from two additional cohorts of first-time freshmen (the Classes of 2017 and 2018) to better understand whether the patterns described in the original report have been consistent over time.

The ninth grade is a critical year for students. In 2018, the School District of Philadelphia (SDP) established a new Ninth Grade On-Track Definition. This metric defines which course credits a student must have earned by the end of the first year of high school to be considered on track to graduation. Philadelphia students who are on track at the end of ninth grade according to this definition are approximately twice as likely to graduate within four years as those who are off track at the end of ninth grade (Wills, 2018).

Because Getting on Track to Graduation found an increase in on-track rates between the Class of 2019 and Class of 2020, readers wanted to know whether the increase was different from the small year-to-year fluctuations common for education outcomes. This brief addresses that question with data from two additional cohorts of first-time freshmen (the Classes of 2017 and 2018). Readers can find details of the data and variables used for this analysis in Appendix A and more detailed findings on the Classes of 2019 and 2020 in the original Getting on Track to Graduation report.

It is important for education agencies and the communities they serve to have access to analyses of trendlines in key education outcomes. For this reason, PERC hopes to update analyses of the on track rate regularly through briefs like this one. Readers can also see three years of ninth grade on track rates for individual schools on the SDP dashboard. To do this, navigate to https://dashboards.philasd.org/extensions/philadelphia/index.html, choose a high school, and select “College/Career” from the menu at the top of the page.