Ready from the Start: Identifying and Supporting At-Risk Ninth Graders from their Earliest Days in High School 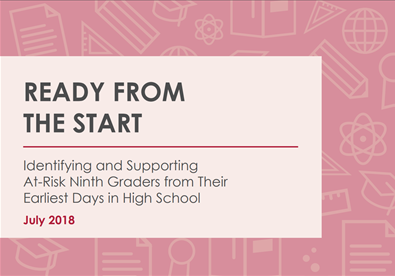 Ninth grade is a critical juncture for students—and can be a jarring transition. Even students with a strong track record in the middle grades can experience academic difficulty, and those who enter high school with poor course grades, weak attendance, or behavior problems are especially at risk. An early misstep can have lasting implications: students who fall off track at the beginning of the school year may find it difficult to recover, and ninth graders who fail to earn the required number of academic credits are at elevated risk of dropping out.
​
To support these most vulnerable students as they start ninth grade, high schools first need a way to identify them. This involves two things: first, having access to students’ school record data from the middle grades and, second, knowing which student characteristics are most predictive of falling off track in ninth grade. Increasingly, high schools have ready access to data systems and dashboards that enable them to look at the prior school performance of new students. Less available are empirical analyses that pinpoint which aspects of students’ prior performance are the best clues that they will struggle in ninth grade.

The research questions are: